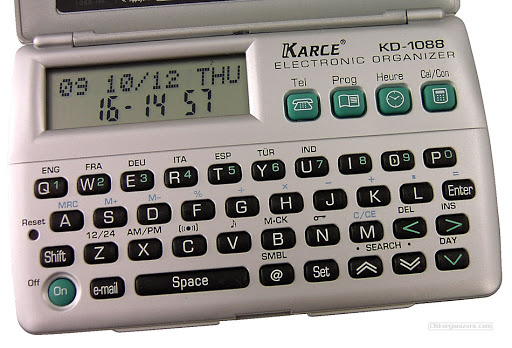 The Karce KD-1688 is a compact, sleek-looking, and inexpensive touch-screen electronic organizer available at Office Depot and some shopping websites, especially eBay.com. It has 192K (kilobytes) of memory, along with a number of built-in applications and data transfer capabilities.

APPLICATIONS/FUNCTIONS: The KD-1688’s built-in functions include a ten-digit calculator (with percentage, square root, and memory features), memo (allows short memos to be entered by pressing letters on the screen with a stylus), game (number-guessing, called “Mastermind”), telephone directory (has separate modes for business and personal numbers), scheduler, alarm, time (has world time mode which allows you to check the time and date in cities around the world, as well as a calendar display and hourly chime option), measurement conversion, and bank account (keeps a balance which can be added/subtracted from). It can also convert currencies, but the currencies and their values have to be defined by the user.

DISPLAY: The LCD display, which is almost 2.5″ (measured diagonally), reserves about half of the screen for the displaying the appropriate letters, numbers and/or icons which the user can press with the stylus in a particular application. The rest of the screen has three lines. The first line can display letters and numbers, the 2nd line only numbers, and the third line is reserved for showing monthly calendars using very small numbers. The KD-1688 can only display uppercase letters, except for when e-mail addresses are being entered (this can be done in the telephone directory mode), where lowercase letters are used. For a PDA, the display is not very hard to read if the room lighting is good enough, but it lacks a backlight feature. Compared to other PDA and electronic organizer models in this price range I have used, the KD-1688’s text is a bit smaller but clearer/sharper. A plastic lid protects the screen and buttons when not in use and uses a magnet to stay shut. It can be folded behind the unit if necessary. The lid is silver colored, with the Karce logo and model name printed on it, while the rest of the unit is metallic blue.

CONTROLS: In addition to the touch screen, the KD-1688 has a power button, four directional keys, and several membrane application buttons which can be pressed with the stylus. The directional arrows are displayed on the screen as well, so the stylus or keys can be used depending upon the user’s preference. I found it more convenient to press the right arrow button than to press “Space” on the screen when entering data. The included stylus conveniently fits in a slot on top of the unit when it is not in use. If you need a replacement, the stylus from an Ultronic TS-320 electronic organizer will also work on this unit, but doesn’t fit in the slot.

INSTRUCTIONS: A very small but fairly thorough fold-out instruction booklet is included and is helpful, except for the previously-mentioned error regarding the battery compartment. More instructions involving data transfer are available in the help section of the PC-Link program.

PC-LINK FEATURE: The Karce KD-1688 comes with a CD and serial cable which allows it to be connected to a computer, transferring data to and from it. It also allows data to be sent/received in single or multiple records, unlike some organizer and PDA units which can only send/receive the entire memory content in backup format. Records can be directly created or modified in the PC-Link program. It is helpful to refer to the instruction booklet when transferring data, as the steps for beginning the transfer need to be taken in the appropriate order. If there is a “time out” error, sometimes the data may have been transferred anyway; be sure to check for this before trying again. I didn’t have any errors when transferring all records to/from the organizer, but occasionally had to try twice to transmit a single record before it worked. I noticed that the PC-Link program changed the Windows clock to 24-hour format (at least in Windows 98); this can be changed back in Control Panel under Regional options/settings.

Overall, while many of these features and capabilities are typical for an electronic organizer of this type, the Karce KD-1688 substantially exceeds the abilities of most other models in its price range in terms of memory capacity and external data transfer. The number-guessing game and bank account application are also generally not included on similar units from other brand names. However, if you need a display backlight, language translation capabilities, or the ability to enter both upper and lowercase letters, this organizer probably isn’t the best choice.

Other products from the Karce brand name include keyboard-based organizers, calculators, and other types of electronics. The Karce website is located at www.karce.com.

Importance of legal and law in society 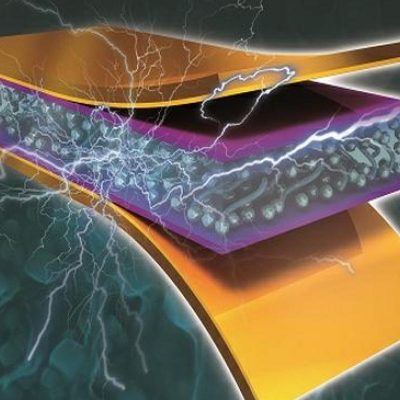